Here's a little spin on the "oldie-but-goodie" creative writing assignment.

When I grow up, I do not want to be a baker. Specifically, I hope that I will never, ever have to help support my family financially based on my skills as a baker and decorator of birthday cakes.

Here are a few reasons why:

First, I tend to view projects with a big-picture focus. This is useful when approaching issues like bed-wetting ("Well, he won't wear a diaper when he goes off to college. I'm sure we'll figure this out soon!"). It is considerably less useful when fine details like ingredient measurements and oven temperatures are important to the overall success of the project.

Second, I am over-confident. I will look at the picture of something designed by a professional and think to myself, "I can do that!"

Third, I am trusting. I actually believe the step-by-step instructions that promise me I CAN make my creation look just like the picture of something designed by a professional.

And finally, I am not neat. In leiu of an explanation, I will introduce "Exhibit A": 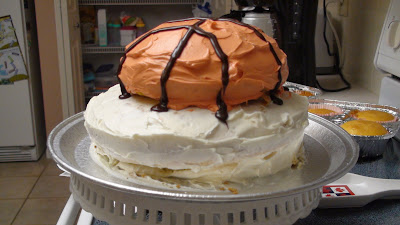 This is the cake I made for my son's fifth birthday.
He wanted a basketball cake.
I wanted to call the local bakery to make it.
I wanted to laugh out loud when I found out how much the bakery wanted to charge.
I decided to save some money and make the cake myself. 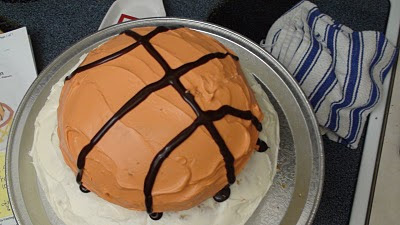 The Twizzlers really jazzed it up, I think: 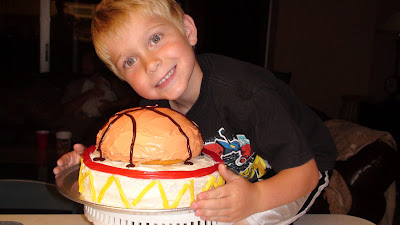 The birthday party-ers had a treat for the senses. In addition to the craftsmanship, the baking left a bit to be desired. Or to be cooked, as it were. My mother-in-law took a bite of her piece and exclaimed, "Oh! There's pudding inside! How wonderful!"

"Um... nope, no pudding in there!! Ok, everyone. Stay away from the center of the cake, please! Apparently it did not get cooked!!"

In conclusion, if I had to bake and decorate birthday cakes for a living, my family would starve. 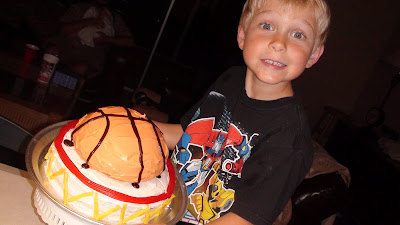 I recently realized that, as a parent, I have some pretty major double standards.


I gave him this freedom around 2 years old. I'll never forget some of the ensembles he picked when we started off. For a period of time, all his outfits included a black pair of soccer socks that, because of his tiny stature, went all the way up to his underwear. Friends would ask me to explain his clothing. I didn't have much to say. I considered making stickers for him to wear out in public ("I dressed myself today"), but decided that it was probably my ego worried about what people thought so I let it go.


He has the same free reign with his hair (much to the chagrin of all grandparents, I'm pretty sure). In fact, this week, we spiked his golden mop into a semi-mohawk-ish do for CLASS PICTURES! He was thrilled, and the rebel in me was kind of excited about it, too!


But, as some dear friends (and mothers of girls, to lend some credentials to their opinions) pointed out, I am definitely not (nor will I be in the future) that same kind of mom with my daughter.


In my mind, she will be my dress-up doll until maybe middle school. And she WILL wear hairbows!


Beyond their appearances, I have discovered another inconsistency in my expectations. With Drew, I constantly pushed him toward developmental milestones. Rolling, sitting, standing, walking, riding a bike, playing tball... for five years we have given this kid every incentive to live his life in the fast lane. And it's been a thrilling ride as a mom to watch him conquer these first five years of life. I've loved every minute of it.


But with Miss M, I just want her to be my rockabye baby for as long as I can hold on to her. I am saddened by her milestones as much as I'm proud of her for accomplishing them. I am in no hurry for this snuggly sweetheart to find some independence.


I reckon that my parenting problems aren't so uncommon, considering the circumstances.

She's my last... Of course I'm going to relate differently to them.


But there's no double standard in the love department. Just a double dose of crazy, abundant, all-out mommy love for these two kids. 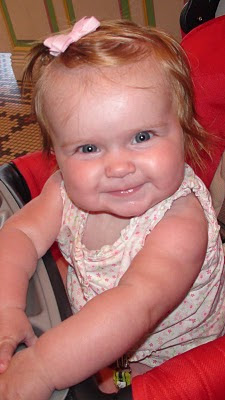 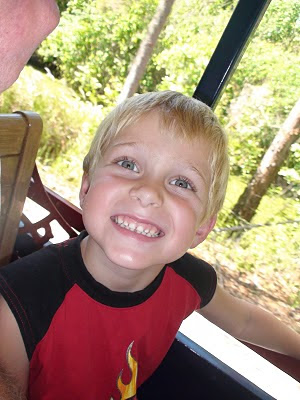 Or half a year will go by 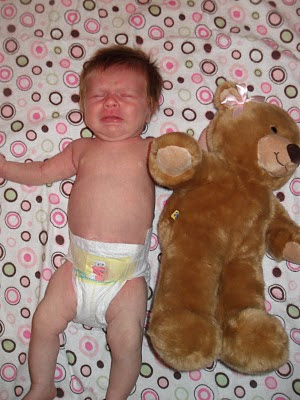 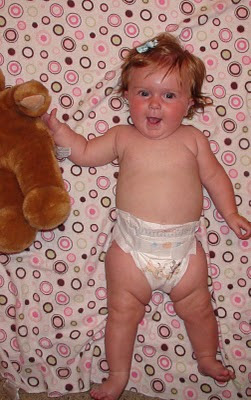 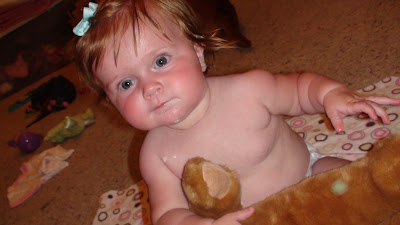 and you'll be left wondering how fast the next six months will go.

Well, technically it's dinnertime and there's a boiling pot on the stove as I type.

But... it's a brand new day on the blog and it deserves a quick welcome, I think!

I went through so many thoughts, so many concepts trying to figure out who I was as a blogger once Miss M came into our lives.

I could have stayed "Mom2Drew" forever, but I'm sure it would have been a page in my daughter's tell-all book someday. "It all started when my mother didn't even acknowledge me on her blog header..."

So, for about a year I have contemplated. I brought my concerns to you and you all graciously gave me ideas (do you remember helping me out those many months ago?).

But the best advice I got was to wait and see what this new child would add to my life before I settled on a new moniker.

I decided to go by "A.M. Mama" for three reasons. First, the "A" and the "M" are the initials of my two kids first names.

Second, I want the AM to also connotate the morning. I really believe there's a huge significance in the possibilities that mornings hold for mamas of young ones. I am stretched beyond my abilities in the mornings. I am pulled in a million directions by 9am. I am no longer permitted the luxury of being a night owl as a mother to preschoolers. The mornings are filled with possibilities for me as a mother. They are my quiet hours to be with God. They are the precious hopeful moments when the to-do list seems possible and the coffee's still hot.

And third, God promises in the Bible that He bestows new mercies each morning. I don't know about you, but I need a reminder that no matter how frazzled and unglued I become by 9pm, He's ready to hand me a fresh page at 6am (give or take... depending on how many times I hit the snooze button).

Thanks for reading... thanks for celebrating this new page with me.

I just saw the "finished product" of my new blog design and can't WAIT to share it with you.

I think it'll be up soon, so perhaps for the last time, I'm signing off as...
Mom2Drew
2 comments:

Memos I Wish I Had Received Today

Please be advised that Miss M has now perfected a new form of communication - a high-pitched shriek. She intends to debut said verbal milestone around 1 o'clock.

It would be preferable that you cancel your trip to the public library which is set to occur at the same time.

While it might be tempting to grab the empty plastic bag in your garage today for your walk with the dog, please be advised that said bag was used for a sprinkler-related project over the weekend.

The leaky tube of apoxy glue was temporarily housed in that bag.

Management cannot be responsible for damage to clothing or stains to skin, hair and various other fabrics from this bright purple substance.

We applaud your desire to scrub the tile floors throughout the common area today. Please note, however that while your chosen cleaner of choice is titled "Barkeepers Friend", a more suitable name might be "Mom2Drew's Enemy".

You may be pleased to note that by the third complete cleaning of your tile floors, the white chalky residue will begin to dissipate.
1 comment:

The First Step Is to Admit You Have a Problem

My son woke up this morning, walked out of his bedroom and announced that the house smelled "kinda like IKEA".

My husband just stared at him, then glared at me.

"Could you please stop shopping with him so much??" he pleaded.

I tried to explain why my son could identify the difference between various retail shopping establishments based on their scent alone (IKEA was simple enough... I had just put a cinnamon raisin bagel in the toaster this morning which smelled like the heavenly cinnamon buns they sell).

But I think the damage was already done. No doubt my hubby remembered when I took Drew shopping a few weeks ago with $10 dollars of his own money to spend. And he bought clothes.

Hello. My name is Mom2Drew, and I'm a shopaholic.
5 comments:

So Mom2Drew (and a little one, too)
is just about done with the number "2".
Which is just as well. And I'll be just fine,
when the Design Girl solves my problems with a "redesign".

Doesn't He Make You Nervous???

That's a question I answer a lot.

On the playground, at the beach, in our backyard, out front. Inevitably, when people watch my son "play", they always ask me if his antics make me nervous.

Because, I gather, he makes other people VERY nervous.

I think I might be more prone to worry if I hadn't watched this child climb up a slide at 10 months, climb out of his crib at 14 months and conquer just about every other obstacle in his path from that moment on. 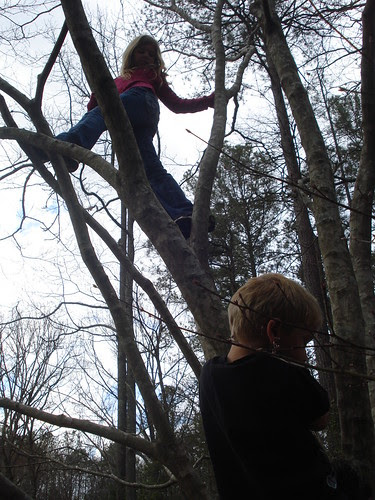 With older cousins to play with this past week, Drew pushed his own limits, conquering bigger, higher, faster goals. 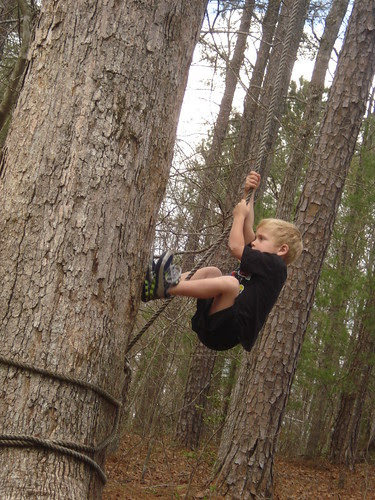 And I can still honestly say that as I watched him hang precariously from perilous perches... 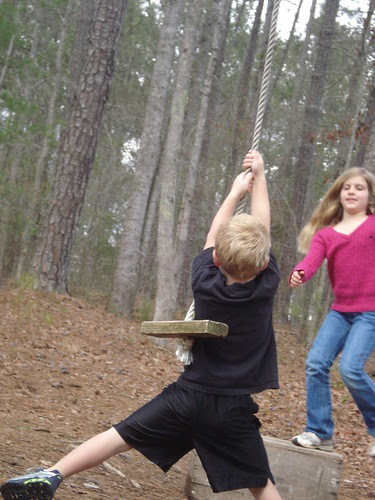 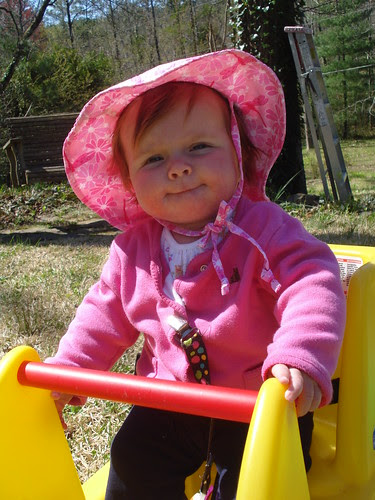 The thought that this little one might have an affinity for the adventurous? 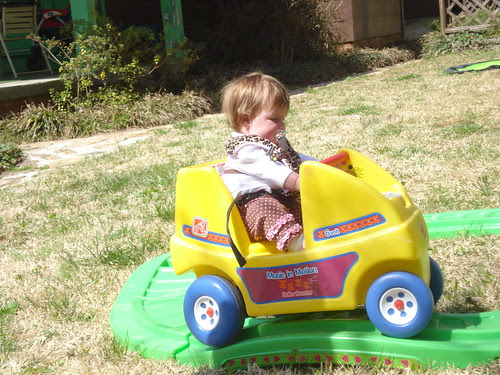 THIS makes me VERY nervous!!
2 comments: