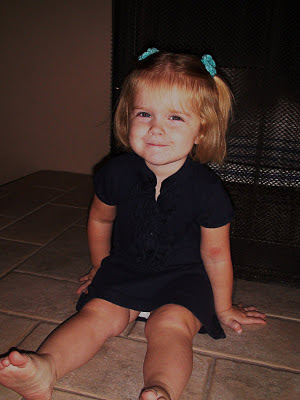 Thousands of food items lining the shelves of the grocery store.
No volume-control yet for her enthusiastic vocal chords.
One question she's really good at asking.
MANY entertained fellow shoppers at Publix tonight!
4 comments:

The One Year Mark

One year ago tonight, I was snuggled in a hospital bed with Drew as he recovered from brain surgery. I can still feel that baby of a five-year old in my arms, his diminutive frame swallowed up by cartoon-printed scrubs and piles of blankets.
A whole YEAR has passed. One YEAR! I suppose it's similar with most major life events; this one feels like it happened only yesterday - and on the other hand it feels like we've lived ten lifetimes since then.
Drew is happy, healthy, and is showing no ill physical effects. He's doing great in his schoolwork and he's playing baseball - REAL baseball (no more t-ball for him!) - on a team with mostly eight year old companions. He holds his own running, sliding, roughhousing and tumbling with the best of them.
Sometimes I'll forget he's even had brain surgery. Then, he'll get a short haircut that will reveal a zipper-sized scar up the back of his head and neck, and I'll briefly recall all this past year has held.
It's been a good year in many ways, a hard year in many ways, but a busy one in every way. Perhaps that's why I've all but given up on blogging. We've made many changes in our lives, many of those choices making us busier than ever before. (Perhaps those will be posts for another day.)
Today, though, I write to remember where we were a year ago. To tell of God's faithfulness that day, and the days, weeks and months that followed in bringing healing to our son's little head. To tell of God's blessings in allowing us to experience the "Peace that passes all understanding". To thank Him for a clear diagnosis, a decisive plan, an amazing support system of family and friends and a flood of prayers on his/our behalf!

16 I will come and tell about your powerful works, Lord God.
I will remind people that only you do what is right.

17 God, you have taught me since I was young.
To this day I tell about the miracles you do.
18 Even though I am old and gray,
do not leave me, God.
I will tell the children about your power;
I will tell those who live after me about your might.