Well, I survived it.
I came.
I ran.
I walked.
I prayed.
I conquered the Beach Beast this past Saturday. 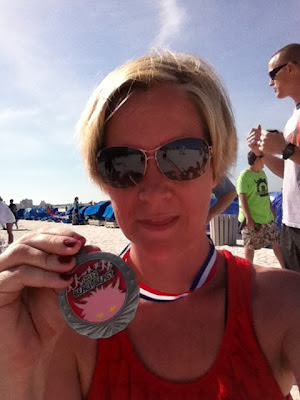 Yeah, that's me with my beastly medal.

It was actually a lot of fun.  Well, except for the part where I had to run through powder soft sand.  Which comprised at least 3 miles of the 3.2 mile course.  I tell you what.  Our white, soft sandy beaches may be a draw for tourists, but after about 5 strides into running through the stuff, you need to keep me far far away from the St. Petersburg Chamber of Commerce marketing department.  Because you don't want to know what I think about our soft, fine, you'll-be-finding-it-on-your-person-for-days kind of sand.  Have you ever had one of those nightmares where you're running and running but your feet aren't getting any traction on the ground?  You're fighting to move forward and you just can't get there?  Anyway... Moving on.

So, I ran through sand.

And then through the surf.  Three steps into the water, a wave charged us and the next thing I knew, my left shoe had a layer of sand sitting under my toes.  I carried that little "pocket" of mud throughout the course.  My husband suffered the same thing, however, at the pace we were moving, he was actually able to hop alongside me on one foot, remove his shoe, dump the sand, stop to put his shoe back on, then catch up with me.  I'm not joking.

The obstacles were all at the end of the course.  About fifteen of them.  Running up ramps, jumping over walls, crawling under cargo nets and through darkened sand tunnels.  My husband had strategized beforehand whether he'd go before or after me on each obstacle.  It was a genius plan.  I don't know what I would have done without him, truly.  He ran up ramps ahead of me, and would sit at the top with his arm outstretched for me to grab onto.  He waited below as I flung my body over walls and provided "boosts" when I needed them.  I always needed them.  He talked to and encouraged me the whole way through the race and was seriously a rock star husband.  (Despite what I may or may not have said to him while I was running/trying not to throw up along the course.) 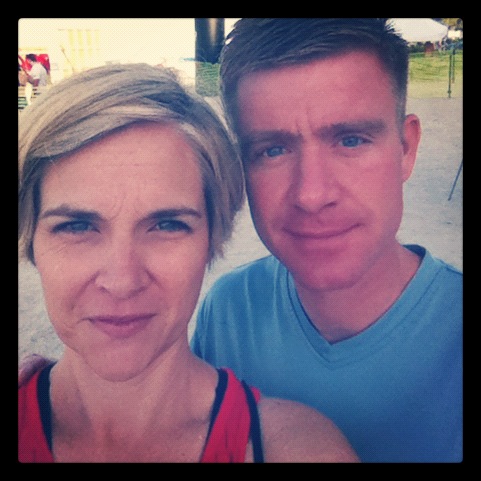 We had some wonderful friends show up to cheer us on.  Their daughter currently holds a title in the Miss Florida pageant circuit, and she was showing me post-race, how to pose for a nice picture. 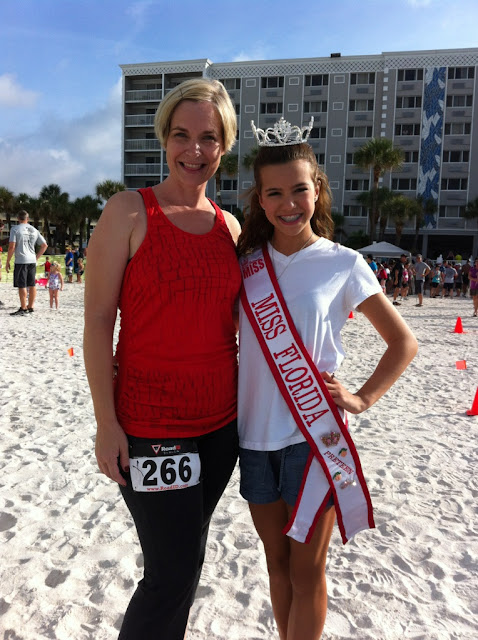 Apparently, one of the secrets to looking great in a photo is to have "pretty feet".  I think that really only has to do with how you're standing, but I couldn't help thinking that I might as well be a lost cause at this point.

After the race was over, my feet were swollen and sandy.  My shoes each carried approximately 5 lbs of sand and salt water.  I don't remember swallowing any of the water, but my ankles looked like I was retaining quite a lot of it, so who knows.

Today, my feet and ankles are still a bit puffy.  My arms and shoulders ache.  I keep asking my husband if he's tired or sore from the race.  He's doing his best to give me the answer he thinks I want to hear.  "Um... oh yes, the race.  Oh yeah.. sore.  Yes, very sore.  And tired.  Yes, I'm also super tired from that 5k run more than 24 hours ago."

A friend of mine and I are taking on an even greater running challenge in the next few months.  You'll have to stay tuned for more details.  Let's just say I'm already thinking of the perfect running "outfit" and may just borrow one of Miss Florida's tiara's to complete my look!

And I've got until February to work on my "pretty feet" pose for those post-race pics!!
2 comments: